Friday evening at Festi’neuch, the abrasive rock of the highly anticipated Irish from Fontaines DC died twenty minutes before the end of the concert. Before that, the Romandes Emilie Zoé and Baby Volcano, as well as the French headliner Clara Luciani distinguished themselves as pop-rock and electro warriors with character.

With their English companions Idles, Fontaines DC had helped to awaken rock across the Channel four years ago. In Neuchâtel on Friday, on the second evening of Festi’neuch, the Irish staged him anesthetized before the hour with a scuttling in the rules of the rock’n’roll circus art.

After forty minutes of a concert where their alternately dry and haunting repertoire draws its roots from post-punk, the guitarist suddenly smashes his instrument on the stage of the Lacustre. Stupor within the public as well as the group, who left the boards prematurely never to return. Without any explanation. Crossed a little later, the singer Grian Chatten just drops a laconic: “I Will Tell You Tomorrow”. But tomorrow will not change anything in this mess for which the training management will have no more answer.

Everything had however started quite well, with a few pieces of bravery between darkness and melodic bursts delivered by a quintet chaining the devilishly effective titles of their first three albums. At the time of dropping the case, in front of his name inscribed in green, white and red initials, Fontaines DC had revealed his talent in a form of rock urgency with “Sha, Sha, Sha”, “I Don’t Belong”, “Televised Mind” and the fatal and incandescent “Too Real” on which it was scuttled.

Earlier in the evening, three more valiant and feminist warriors thankfully stood out. Each in their own rock, pop or electro style infused with hip-hop and Latin music, the Neuchâteloises Emilie Zoé and Baby Volcano as well as the French Clara Luciani showed character and accomplished performances.

>> To see also: the program “Ramdam” and the interviews of artists carried out during Festi’neuch:

In a compact rock tandem formula with her new drummer Fred Bürki, Emilie Zoé completes an intense appearance with “Roses on Fire” and the unreleased “Castle” after a few more acoustic, mid-tempo and melancholy incursions where the androgyny of her voice works wonders.

Shortly after, under the festival’s packed main marquee, Clara Luciani began her popular headlining show with “Heart” then “Love always”. To the sound of a beating heart and under her name in large initials which first appear in relief, the elegant and slender French singer appears in a silver lamé wrap-over blouse and black pants alongside a drummer , a bassist and a keyboard perched on platforms, a guitarist and three singers.

The charm of her melodic pop recently tinged with great zests of disco now operates with all audiences and the recent winner of two Victoires de la musique completes her acceptance with the unstoppable and feminist hit that revealed her, ” La grenade”, followed by the irresistible ode to swaying that is “Respire encore”, a hit from his second album this time. 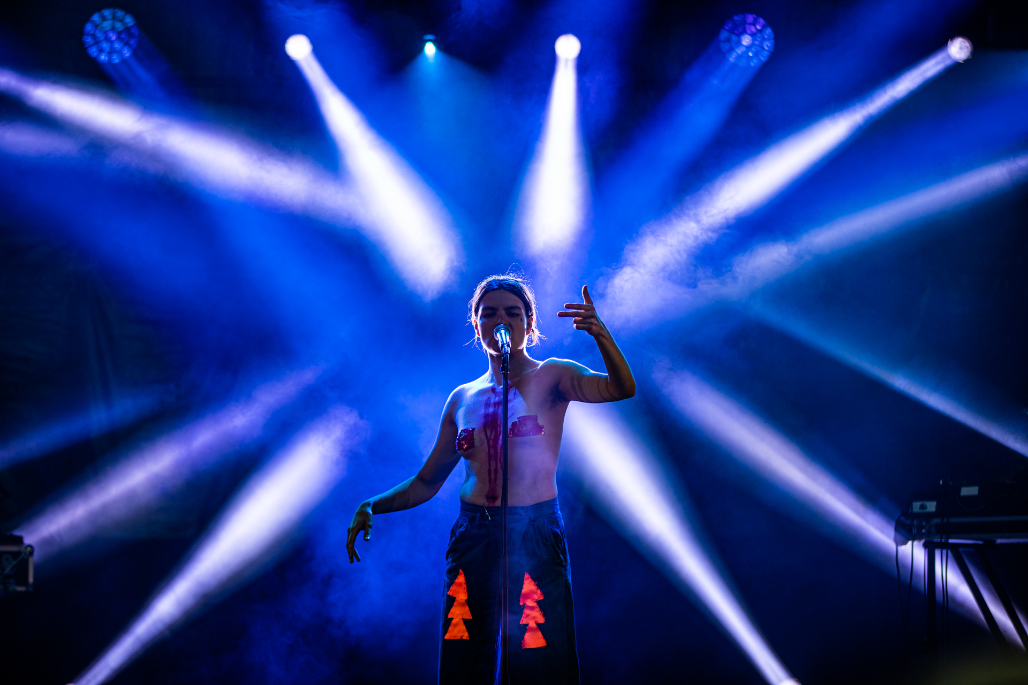 At the other end of the festival site, on the stage of La Marée, Baby Volcano during this time played the sorcerers between inhabited songs, contemporary dance performance and electronic tribal beats mixed with Latin hip-hop and trap sounds. On committed texts delivered in Spanish and French evoking the parts of her body, the Neuchâtel singer Lorena Stadelmann of Guatemalan origins lets go and experiments in overalls.

Before removing the top and revealing red adhesives on her breasts and traces of blood flowing from the neck to the chest, thus echoing the themes of the songs collected on the mini-album “Síndrome Premenstrual” recorded with the electro producers Jura residents Josué Salomon and Louis Riondel hooded. Stripper.